HISTORY OF THE SHRINE 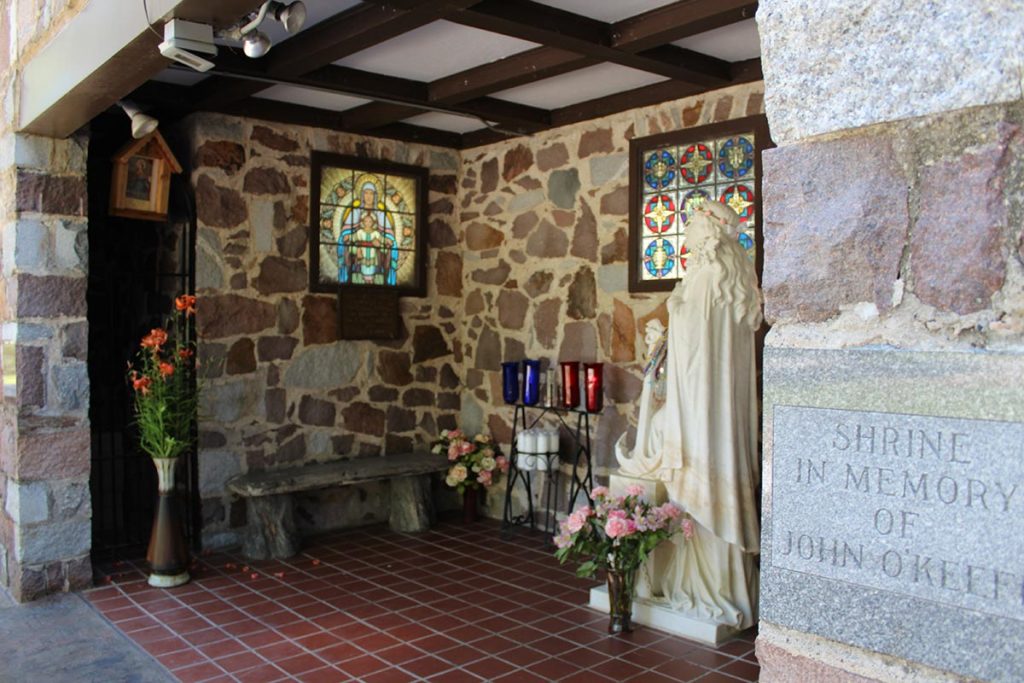 In the late 1940’s a self-sacrificing priest, named Father I.C. Wiltzius, devoted his frail energy to calling the world to venerate a Virgin-Martyr known as Saint Philomena. It was through the efforts of Father Wiltzius that the Shrine to Saint Philomena was established. He came from the Milwaukee area, and brought with him a first-class relic of the Little Virgin Martyr, originally obtained by Father Maurice Dorney in Naples, in 1937.

Saint Philomena made her entry into Briggsville on the last Sunday of August 1947, and the outdoor shrine dedicated to her honor was started on August 8, 1949. It was planned as a replica of the dungeon where the young Martyr-Saint, Philomena, had suffered and died to preserve her virginity.

The upper structure is built of granite from many parts of the world. The red granite, which predominates, is the genuine Montello stone, from Montello, a twenty-five mile distance from Briggsville.

A man of seventy-six and his helper a boy of sixteen completed the structure on September 1, 1950. There are forty-five tons of granite in the superstructure alone, all hauled and laid by the two. Old Jake used a cane to support himself because he was badly crippled…until the fourth day of work…that’s when his “Little Girl Friend”, as he fondly called Saint Philomena, fixed him up, he swears. He discarded the cane and didn’t use it again. 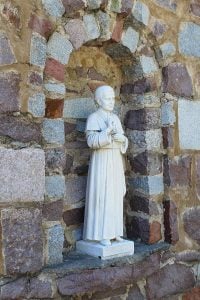 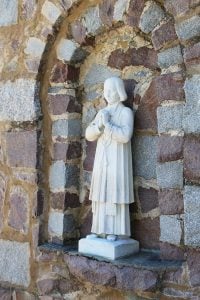 The statue of Saint Philomena is carved from Carrara marble and was imported from Italy. It is six feet, three inches high. Father Wiltzius’s housekeeper told of the arrival of the statue:

“The pine packing case was opened to determine whether the statue was undamaged and then was nailed shut again. That night, there was a lot of racket and the sides of the packing case were knocked clear across the street! You might say now that that was strange, but it really happened.”

Father said the Saint was impatient to have the shrine completed; she wanted to get out of her case.

On the left wall of the dungeon shrine is a statue of Saint John Vianney (left image), and on the right wall is a statue of Pope Pius X (right image); both are remembered for their great devotion to Saint Philomena.

A statue of the Blessed Mother is on the very top wall of the Shrine, overlooking all.

The stained glass windows, embellishing the Shrine of St. Philomena at Briggsville, tell the story of the life and tortures of the beloved Saint. These windows are carried out in pictorial and symbolic manner. 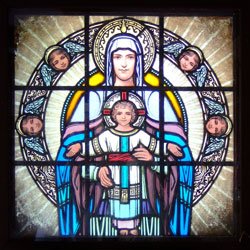 The first window represents the Apparition of the Blessed Virgin, with the Infant Savoir, to Saint Philomena, while she was fettered in her tomb below the royal palace.

The Statue, for this reason, does not face forward but gazes up at the representation of the Apparition. 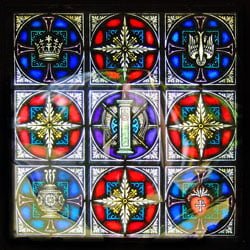 The Pillar and the Scourges are at the center of the second window. 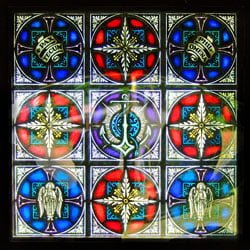 The Anchor with Rope is at the center of this window. 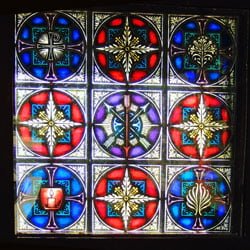 Arrows are at the center of this window; two pointed in opposite directions, and one with a curve line upon it, signifying fire. 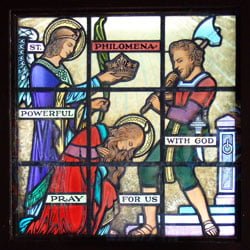 This is another pictorial window. It shows the final phase of her martyrdom: beheading.

The Archangel Gabriel stands at her side, poised to place the Crown of Martyrdom upon her head, and the palms of victory in her arms.

Her executioner, with a fiendish glee upon his face, is poised and ready to carry out the last of the cruel torments commanded by the Roman Emperor Diocletian.

PRAY TO SAINT PHILOMENA, WHATEVER YOU ASK FROM HER, SHE WILL OBTAIN FOR YOU.

This website uses cookies to improve your experience while you navigate through the website. Out of these, the cookies that are categorized as necessary are stored on your browser as they are essential for the working of basic functionalities of the website. We also use third-party cookies that help us analyze and understand how you use this website. These cookies will be stored in your browser only with your consent. You also have the option to opt-out of these cookies. But opting out of some of these cookies may affect your browsing experience.
Necessary Always Enabled
Necessary cookies are absolutely essential for the website to function properly. This category only includes cookies that ensures basic functionalities and security features of the website. These cookies do not store any personal information.
Non-necessary
Any cookies that may not be particularly necessary for the website to function and is used specifically to collect user personal data via analytics, ads, other embedded contents are termed as non-necessary cookies. It is mandatory to procure user consent prior to running these cookies on your website.
SAVE & ACCEPT
Translate »